To share your memory on the wall of James Frantz, sign in using one of the following options:

There may be a delay while processing. Please do not click the back button or refresh while a payment is processing.

Your donation has been processed successfully

Print
James (Jim) Robert Frantz passed away peacefully at his home on Saturday, December 28, 2019. He was 84.

Born in Scranton, PA, he moved with his parents to Buckingham, and graduated from Central Bucks high school where he was very acti... Read More
James (Jim) Robert Frantz passed away peacefully at his home on Saturday, December 28, 2019. He was 84.

Born in Scranton, PA, he moved with his parents to Buckingham, and graduated from Central Bucks high school where he was very active in football, basketball, baseball and wrestling. After he graduated, he spent four years in the Air Force and was stationed in Greenville, Miss. He was a jet mechanic and also played baseball for the Greenville Air Force Team; it was there that he met his wife, June, of 63 years.

Jim had his own business, Frantz Antenna Service for 40 years. He served as president of the Doylestown Jaycees in 1965 and played a leading role in the forming of the Doylestown YMCA. He was a wrestling coach for Warrington athletics; and he belonged to the Doylestown rotary for several years. In addition, he was a bass fisherman who made the nationals for many years and an avid golfer. In 2002, Jim had a massive stroke; he was forced to retire and spent the next 17+ years in a strong physical fight.

He was preceded in death by his mother, Jane Elizabeth Lilly-Frantz, and son, James Robert Frantz Jr. who passed away in 2018. He is survived by his wife, June, his daughters Julie Flack and Jeanise Dimitri. He is also survived by his grandchildren Clinton Flack and his wife Jessica, Shantel Keefrider and her husband Brian and Colton Dimitri; and his great grandsons Rhett and Lincoln.

To send flowers to the family or plant a tree in memory of James R. "Jim" Frantz, please visit our Heartfelt Sympathies Store.

Receive notifications about information and event scheduling for James

By subscribing to updates, you will receive any notifications sent about changes to service schedules or other important information

Please add your text number or email address before submitting.

You have successfully been subscribed to notifications!

You will receive any future notification messages.

Provide comfort for the family with a meaningful gesture of sympathy.

Show you care by sending Flowers

Donations are being accepted for: Shantel Keefrider.

We encourage you to share your most beloved memories of James here, so that the family and other loved ones can always see it. You can upload cherished photographs, or share your favorite stories, and can even comment on those shared by others. 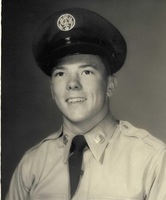